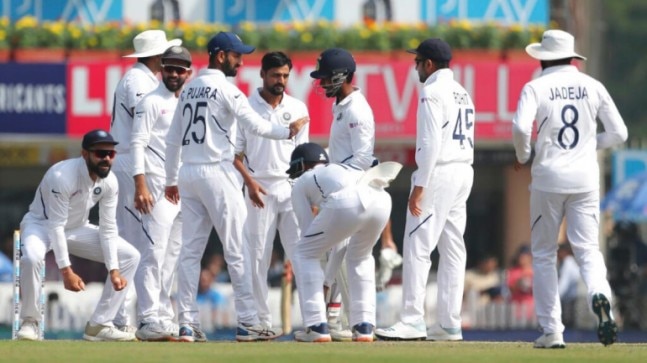 India head coach Ravi Shastri heaped praise on off-spinner Shahbaz Nadeem, who made his debut in the Ranchi Test and impressed one and all with his bowling, picking up 4 wickets in the match as the home side won by an innings and 202 runs to sweep the series 3-0 against South Africa.

Nadeem got two wickets in both innings and affected a run out during the match to cap off a brilliant performance in his first international match for India.

India needed 2 wickets on Day 4 to win the match and Nadeem finished it off by sending back Theunis de Bruyn and Anrich Nortje off successive deliveries in the second over of the day.

Shastri was so impressed with Nadeem’s bowling that he said even the great Bishen Singh Bedi would have been proud of the 30-year-old offie.

“Extremely impressed. Yesterday when he got his first wicket, I was saying ‘If Bishan Singh Bedi was watching, he would’ve said ‘cheers young man’. It was a spinner’s delight. To watch it from the outside was classical. 420 plus wickets, the guy has put in the yards, about time he gets the distance.

“Glad he finished off the game. In front of his home crowd. To take four wickets, what was remarkable was the way he started. There was no nerves, first three overs were maidens. Every ball was on the spot. That’s because of his experience,” Shastri said after the match.

The Asian giants, led by Virat Kohli, have now won 11 consecutive Test series at home and are on top of the ICC Test ranking charts. With 5 wins on the trot after the 2019 World Cup, India are numero uno on ICC World Test Championship table with 240 points, 180 more than 2nd-placed New Zealand.

March 7, 2020 AppicNews Comments Off on Ayew goal guides Palace to 1-0 win over Watford in EPL

Details: What PM Modi, President Xi had for dinner on Day 1 in Mamallapuram

October 11, 2019 AppicNews Comments Off on Details: What PM Modi, President Xi had for dinner on Day 1 in Mamallapuram

February 15, 2020 AppicNews Comments Off on Sunrisers Hyderabad to play their IPL 2020 opener vs Mumbai Indians on April 1