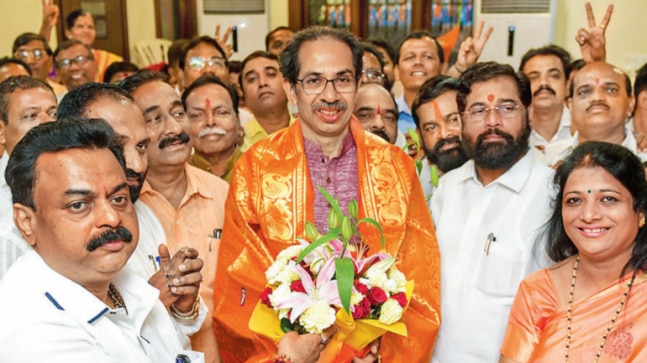 A day after the Maharashtra poll results were declared, Shiv Sena continues to play the hardball by reminding its ally BJP of the 50:50 formula. With the BJP tally in Maharashtra falling down, Sena seems to making the hay as the sun shines.

Posters crowning Shiv Sena scion Aaditya as the future CM came up in Worli on Friday morning. “Every Shiv sainik wants that Aaditya be the CM. But the decision will be taken by the leaders like Uddhav, Fadnavis and Amit Shah. The way in which Aaditya has taken the campaign has worked well and will continue in the days to come.

The final word will be that of Uddhav Thackeray. Seats may be less as you project but Sena is in a decisive position,” newly-elected MLA from Thane Pratap Sarnaik told India Today TV A watchful BJP, is however, playing it safe. “Whatever will happen, will happen as decided between the two allies,” said BJP leader Ashish Shelar.

In 2014 , the Sena had little room to negotiate. But with the BJP winning lesser number of seats this time, the Sena has got more elbow room. Even after joining the govt last time, Sena had to settle on fewer and relatively less important portfolios. This time apart from the Deputy CM’s post the Sena may also ask for important portfolios like Home or Urban development.

Uddhav Thackeray may have played the younger brother in the seat sharing, but in the power sharing the Sena’s tiger seems to be in no mood to play the junior partner. The political action will resume post Diwali and the crackers will only burst after that.

Nick Wright is shocked the Warriors traded for Andrew Wiggins

February 7, 2020 AppicNews Comments Off on Nick Wright is shocked the Warriors traded for Andrew Wiggins

March 13, 2020 AppicNews Comments Off on The Latest: Bahrain and Vietnam GPs postponed

Pragyan Ojha hits back at critics slamming Motera pitch: You have to be tested on any surface

February 25, 2021 AppicNews Comments Off on Pragyan Ojha hits back at critics slamming Motera pitch: You have to be tested on any surface