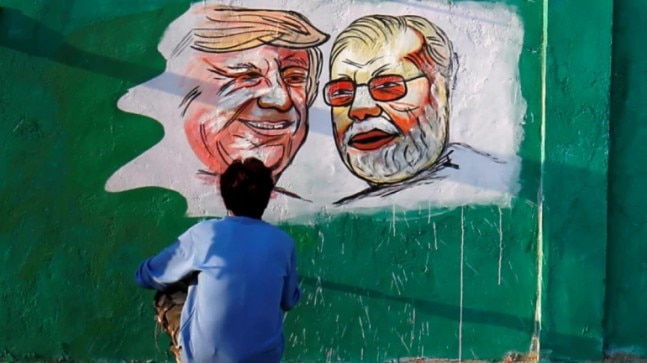 The “fascist alliance” between “forces attempting to erode democracy and curb freedom of speech and religion” is dangerous not just for India but the world as a whole, a group of over 160 academicians, activists and students from Gujarat said in an open letter against the “Namaste Trump” event.

US President Donald Trump will arrive in Ahmedabad on February 24 and will take part along with Prime Minister Narendra Modi in an event, christened ‘Namaste Trump, in the newly-constructed Motera stadium in Ahmedabad.

“With a spectacular rise in global fascism today, this alignment between the largest democracy in the world and the most powerful one is dangerous not only for India, but for the world as a whole. We cannot in good conscience support this alliance between forces that are attempting to erode democracy and curb freedom of speech and religion,” the 168 signatories said in the letter.

“We cannot stand by as families are deprived of their homes in order to make room for those who wish to remove citizens from their countries. We unequivocally condemn this fascist alliance, and urge the Indian State to prioritise the needs of its citizens over the greed of the global elite,” the signatories said.

They include activist and danseuse Mallika Sarabhai and academicians from institutes like Indian Institute of Management-Ahmedabad and CEPT University.

They claimed India and USA had seen a rise of “authoritarian politics” in recent years, with Modi and Trump at the helm.

The letter claimed Trump was “unreservedly racist, Islamophobic, xenophobic, and anti-poor,” while Modi had enacted the Citizenship Amendment Act that bars “Muslims from neighbouring Muslim-majority countries from receiving expedited citizenship offered to other minority groups”.

It said the Modi government was all set to enact the National Register of Citizens, “which European Union members have warned could precipitate the largest statelessness crisis in the world”.

“In the past year alone, an unprecedented 69,550 migrant children were separated from their families and held in government custody. The list of detained migrants included 52 Indian nationals, one of whom died in US custody in May of last year….” the letter alleged.

While Trump enacted a ban against refugees and migrants from several Muslim-majority countries, India has enacted the CAA, they said in the letter.

In the context of “crores” being spent on the ‘Namaste Trump’ event, the letter claimed the “privileging of foreign capital over local needs is sadly familiar”.

It also spoke about a wall being built to keep a slum hidden during the US president and PM Modi’s roadshow, and eviction notices being given to 45 families, in the process displacing a community that has resided in Motera for the past 20 years.

They said large infrastructure projects like the Sabarmati Riverfront Development Project and others under the “Vibrant Gujarat” initiative to attract foreign investments had resulted in mass eviction and displacement of poor people.

This “development” had left many people behind, the letter said, and alleged that Gujarat has witnessed wide-scale violence against its minorities, increasing ghettoisation and the systematic erosion of democratic values.

The signatories claimed the Gujarat government had instructed police to deny permissions for protest 15 days prior to Trump’s visit, a move that infringes on fundamental rights enshrined in the Constitution.

While the ‘Howdy Modi’ event in the US allowed thousands of protesters, the Indian state chooses to preempt any expression of dissent before ‘Namaste Trump’, it claimed.

November 19, 2019 AppicNews Comments Off on Rivers’ 4 INTs are latest chapter in turnover-plagued season