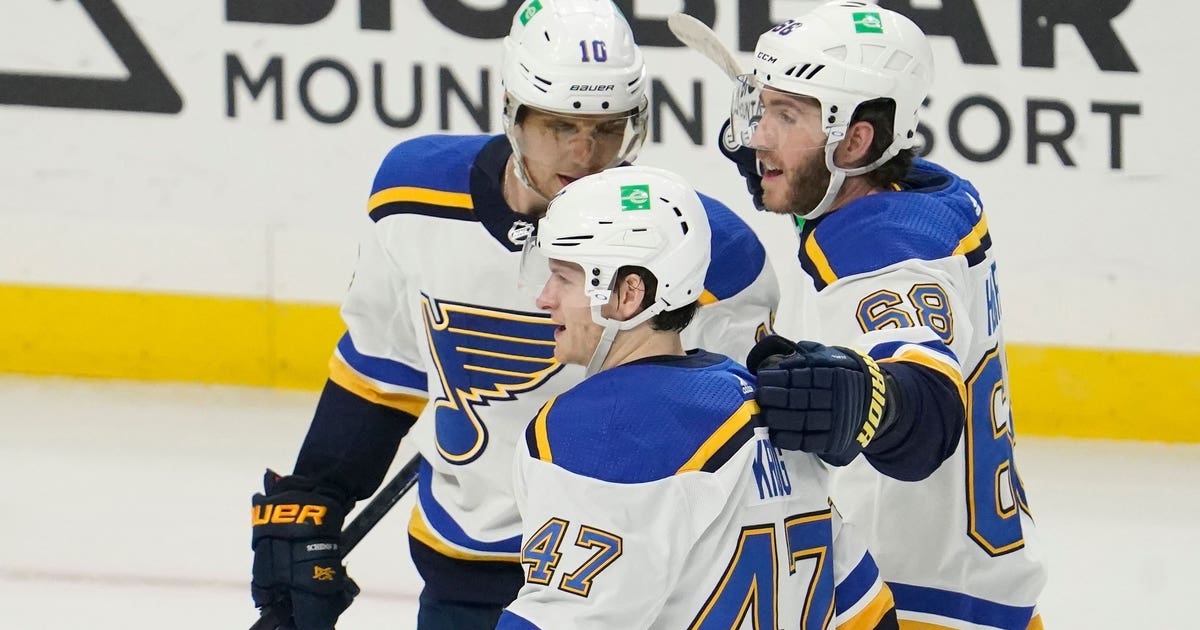 LOS ANGELES — Mike Hoffman made plays on both ends of the ice to help the St. Louis Blues extend their winning streak to three games.

The center scored 90 seconds into overtime Friday night to give the Blues a 3-2 victory over the Los Angeles Kings. Late in regulation, Hoffman chased down the puck in the defensive zone with the goalie pulled. St. Louis ended up converting with the extra skater as David Perron scored the tying goal.

“That’s a huge play by him,” Blues coach Craig Berube said of Hoffman’s save. “He then made another nice play in the offensive zone.”

Hoffman on Perron’s game-tying goal that later set him up for the overtime winner: “It’s huge… It gives our team and everyone around us a huge jolt and I thought we translated it right into overtime.” #stlblues pic.twitter.com/edHfcE3b3t

Hoffman was able to beat Los Angeles’ Anze Kopitar to the puck to prevent an empty-net goal. Perron got a pass from Ryan O’Reilly in the neutral zone and skated into the offensive zone before firing a slap shot past Cal Petersen with 44 seconds remaining in regulation for his second goal of the game.

It was an NHL-leading seventh goal for St. Louis when it is playing 6-on-5.

“Obviously, backchecking is key there. I just tried to get on my horse and whack the puck back out through the neutral zone,” Hoffman said. “Perron made a good play, came down and had a good shot.”

In overtime, Hoffman ripped a slap shot from the right faceoff circle after getting a feed from Torey Krug for his seventh goal of the season.

Jeff Carter and Dustin Brown scored for Los Angeles, which has lost four in a row following a six-game winning streak. Petersen made 19 saves.

“To give a goal up late, I mean, it’s a hockey game and stuff like that happens,” Brown said. “During the six-game winning streak, we squeaked out a couple games where bounces went our way. It’s a good lesson to learn — you’re gonna have to play a full 60 to get out of this little skid we’re in.”

Perron opened the scoring 2:08 into the first period on the power play with a snap shot from the middle of the offensive zone.

The Kings evened it 1-1 when Carter got behind the Blues defense, took a pass from Andreas Athanasiou and put in a backhand in front with 3:19 remaining in the second. It was Carter’s fifth goal of the season and second in four games.

Brown scored 37 seconds into the third for his team-leading 12th of the season and sixth on the power play to put Los Angeles in front 2-1. Kopitar threaded a cross-ice pass to Brown, who put in a rebound after Husso made a pad save on his initial shot.

The Blues are the first team in the league to reach 10 road wins this season. They also set a franchise mark by doing it in only 12 games, surpassing the previous mark of 15 which had been done three times.

The Blues have momentum on their power play after it struggled for most of the season. Perron’s first-period goal was St. Louis’ fourth straight with the man advantage after it converted on all three chances in a 3-2 win at Anaheim on Wednesday.

St. Louis had only eight power-play goals and was 28th in the NHL in its first 21 games, but has scored five goals over the past three games.

Los Angeles has also scored on the power play in three straight games and is 4 for 12 over that stretch.

Kings: C Rasmus Kupari made his NHL debut. The 21-year-old Finnish forward, who was the team’s first-round pick (20th overall) in the NHL draft, centered the third line. He was promoted from the Kings’ AHL affiliate after scoring two goals and nine points in eight games. … Kopitar has four assists in the last three games and is tied for fifth in the league with 21.

The teams meet again on Saturday. The Blues are 2-1 this season in the second game of back-to-backs, while the Kings are 1-0-1.

August 16, 2020 AppicNews Comments Off on MS Dhoni a legend, very similar to Kapil Dev in terms of captaincy, approach to game: Sunil Gavaskar