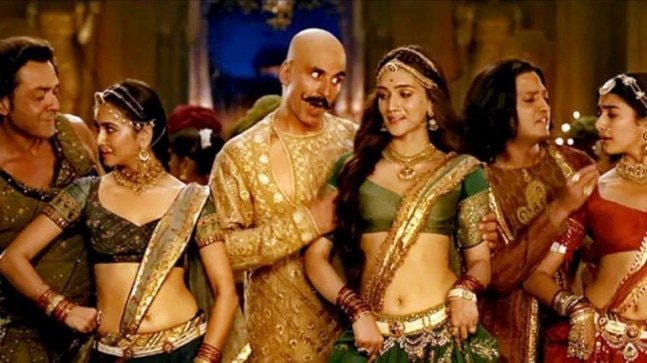 Leaving the other two releases of this week – Taapsee Pannu and Bhumi Pednekar’s Saand Ki Aankh and Rajkummar Rao and Mouni Roy’s Made In China – behind, Akshay Kumar’s Housefull 4 has raced to the top spot.

According to early estimates, Housefull 4 has raked in Rs 18.81 crore at the box office on day two bringing its total collection to Rs 37.89 crore. Friday’s holiday for Dhanteras worked in favour of Housefull 4, giving it a massive opening. Day two of Housefull 4, being a weekend and Chhoti Diwali in major parts of the country, especially North India, has also proven advantageous for the Akshay Kumar entertainer. It is likely to cross the Rs 50-crore mark by the end of the weekend.

Housefull 4 is a reincarnation comedy, based in 2019 and 1419. It is the fourth instalment of the Housefull franchise, starring Riteish Deshmukh, Bobby Deol, Kriti Sanon, Kriti Kharbanda, Pooja Hegde and Chunky Panday, apart from Akshay. The film was initially being directed by Sajid Khan, but he was later removed after #MeToo allegations surfaced against him. Farhad Samji took over the director’s chair after Sajid’s exit.

The team of Housefull 4 have left no stones unturned to promote this rib-tickling comedy. From dressing up as their 1419 personas to embarking on a train journey for a one-of-a-kind multi-city promotional strategy to encouraging everyone to take the #BalaChallenge, team Housefull 4 has done it all.

But their biggest win was a Diwali release. On Diwali, the audience clearly wants to watch something light and funny, and Housefull 4 fits the bill perfectly.

Film critics, however, have panned the film universally. IndiaToday.in’s reviewer, Nairita Mukherjee called it “A hundred and forty-five minutes of non-sense.” Talking about the screenplay, CGI work and costumes in the film, she writes, “The screenplay of Housefull 4 is so confusing that Da Vinci Code will seem simpler in comparison. The extravagant sets, which are heavily influenced by Game of Thrones, from King’s Landing to Dragonstone, appear to be a product of below-par CGI. The flamboyant costumes are worse. Bala is styled to look like a Bajirao-esque Maratha king, and Rana Daggubati’s 1419 avatar, Gama (he is Pappu Rangeela, the girls’ cousin in 2019) is made to look like a hybrid between Khal Drogo, The Lord Of Bones and a Kaalkeya fighter.”

But, it seems word-of-mouth has worked strongly in favour of the film. Which is why, despite negative reviews, the film has fared well at the ticket windows.

Hrithik Roshan and Tiger Shroff’s War has been running successfully at the box office since its release on October 2. But, looks like Akshay Kumar’s Housefull 4 is here to rain on their parade. With Housefull 4, Akshay Kumar hits a hit-hattrick, with all three of his 2019 releases – Kesari, Mission Mangal and now Housefull 4 – becoming blockbusters.

Going by Akshay Kumar’s track record, it is safe to say that his fourth film of the year, Good Newwz, set to release in December, will also bring good news for the actor.

Muzaffarnagar farmers to begin proceeding to Ghazipur from Saturday

January 29, 2021 AppicNews Comments Off on Muzaffarnagar farmers to begin proceeding to Ghazipur from Saturday