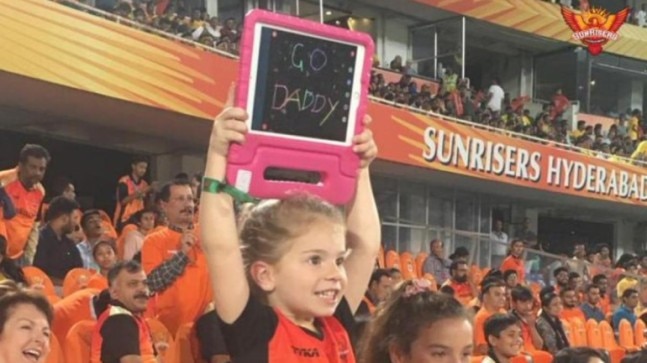 Australia opener David Warner and India captain Virat Kohli are regarded as the best batsmen of limited-over cricket in the current era. Warner and Kohli will renew their rivalry on the cricket field when Australia will tour India for 3-match ODI series in January 2020.

“This little girl has spent too much time in India. Wants to be @imVkohli,” Candice captioned the video.

This little girl has spent too much time in India. Wants to be @imVkohli pic.twitter.com/Ozc0neN1Yv

In the latest video which is doing rounds on internet, Warner’s left-hander’s daughter can be seen hitting some hard shots and claiming “I’m Virat Kohli”.

Recently, David Warner starred in Australia’s 3-0 whitewash of Sri Lanka, hitting 217 runs without even getting out once over 3 matches. With the stunning effort with the bat, Warner became the 1st ever opener to remain unbeaten in all 3 T20Is of a 3-match series.

In 3rd T20I that was played on November 1, Warner was at it again, this time in Melbourne as Australia gunned down 145 in just 17.3 overs. Warner remained unbeaten with a 50-ball 57 as Australia completed the clean sweep.

During the course of his fifty in Melbourne, Warner also became the 1st Australian batsman to complete 900 T20I runs.

He also became the 1st Australia to complete 2000 runs in T20I cricket. The only six he hit on Friday also made him only the 2nd player to hit 100 international sixes in Australia. Adam Gilchrist holds the record with 105 sixes at home.

Meanwhile, David Warner also became only the 3rd batsman in international cricket to score fifies in all 3 matches of a bilateral T20I series.

May 3, 2020 AppicNews Comments Off on Olympians look to help young athletes during shutdown

October 28, 2019 AppicNews Comments Off on Thane police books man who died in pothole accident for over speeding