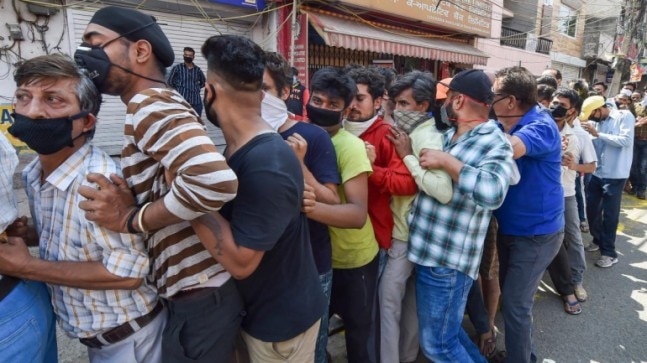 As India’s Covid-19 fight entered its third phase on Monday with considerable relaxations in the lockdown curbs, the government said a record-high number of 1,074 patients recovered from the deadly virus infection in the last 24 hours but cautioned that the restrictions can be reimposed if there is any complacency in following the containment and social distancing norms.

Massive crowds thronged liquor stores, more vehicles plied on roads and cab-hailing platforms resumed services in the shadow of the highest rate of recovery yet from coronavirus.

While the nationwide tally of confirmed Covid-19 cases crossed 44,000 with more than 1,400 deaths, the number of recoveries also neared the 12,000-mark, as per numbers announced by various states and union territories.

Tipplers queued up in large numbers since morning at liquor shops–a common sight in large parts of the country where they reopened as anxious people formed more than a kilometre long queue in several areas.

In the national capital, many government-run liquor shops which opened after 40 days had to be shut as people who gathered outside the outlets did not follow social distancing norms, forcing the police to use mild force to disperse the unruly crowd.

“Shops were asked to shut in places where social distancing norms were violated. At some places, a mild force was also used to disperse the crowd,” said a senior Delhi police official.

In some places in Karnataka, people made a beeline to liquor shops even before day-break and performed “special prayers” with flowers, coconuts, incense sticks and camphor and burst crackers in front of the stores. An elderly woman identified as only Dakamma and stated to be aged 96 years was one among the crowd in Shivamogga waiting to get some liquor.

Stand-alone liquor shops in West Bengal reopened in the three zones but the police closed down several of them within an hour as people started jostling with each other in front of the outlets with social distancing going for a toss.

WHO WILL PAY FOR MIGRANTS?

A political slugfest broke out on Monday over the ‘homecoming’ of migrants after the Congress accused the government of charging money from stranded workers and offered to pay for their travel to native places, drawing a sharp retort from the BJP which said the railways was already bearing 85 per cent of the travel cost and charging only 15 per cent from the state governments.

Accusing the Central government and the Indian Railways of ignoring the demands made by the Congress for ensuring safe and free travel of migrant workers and labourers to their homes, Sonia Gandhi on Monday announced that party’s state units will bear the cost of rail travel of needy migrants stranded at various places across the country as its “humble contribution” to show solidarity with these workers, who have contributed to nation’s development.

The BJP hit back saying the railways has subsidised 85 per cent of ticket fare for Shramik special trains being run to ferry migrant workers and the state government has to pay the remaining 15 per cent.

Asked if the migrant labourers were being charged for being ferried home, Joint Secretary at the Health Ministry Lav Agarwal said, “Based on the request given from states for particular cases, permission was given to run special trains. Be it the government of India or the Railways, we have not talked about charging from workers. Eighty-five per cent of the transportation cost is borne by the Railways, while states have to bear 15 per cent of the cost.”

Liquor in Delhi will cost more from Tuesday as the government has decided to impose a 70 per cent ‘Special Corona Fee’ on maximum retail price, sources said Monday.

“70 per cent ‘Special Corona Fee’ has been imposed on the MRP of liquor bottles. The new rate will be applicable from Tuesday,” an official said.

Earlier in the day, Chief Minister Arvind Kejriwal said all relaxations in the areas where people violate social-distancing and other health norms will be withdrawn.

GOVT TO BRING BACK INDIANS FROM ABROAD

Plans to bring back Indians stranded abroad due the coronavirus pandemic have been chalked out by the government and the process will begin from May 7 in a phased manner, the Home Ministry said on Monday, adding it will be a paid service.

In a statement, it said only people showing no symptoms of Covid-19 will be allowed to travel.

After arrival in India, their medical examination will be conducted and they will be subsequently put under quarantine for 14 days, either in a hospital or in an institutional facility, also on payment basis, the statement said.

According to an estimate, the number of Indian nationals stranded abroad could be in lakhs.

Their travel would be arranged by the government by aircraft and naval ships.

The Union Health Ministry said around 27.5 per cent people have recovered so far from the disease, but cautioned that there was no place for complacency and what was required was a collective effort to keep the spread under check.

At a press briefing on the Covid-19 situation, Health Ministry’s Joint Secretary Lav Agarwal said there is a need for rigorous implementation of the containment strategy while people also need to strictly adhere to hygiene as well as social distancing habits.

Amid reports that the peak of Covid-19 in India may happen in May-June period, the Health Ministry officials said the Covid-19 curve is relatively flat as of now and a collective effort may ensure that the peak does not come ever, but any failure in collectively containing the virus spread may result in a spike in cases.

The coronavirus crisis has exposed the limitations of the existing international system and highlighted the need for a new template of globalisation based on fairness, equality and humanity, Prime Minister Narendra Modi said on Monday.

He was speaking at an online summit of the Non Aligned Movement (NAM), a forum of around 120 developing countries.

Without giving any direct reference or naming any country, Modi also said: “Even as the world fights Covid-19, some people are busy spreading other deadly viruses. Such as terrorism. Such as fake news, and doctored videos to divide communities and countries.”

In his remarks, the prime minister also highlighted India’s fight against the pandemic and said it has shown how “democracy, discipline and decisiveness” can come together to create a genuine people’s movement overcoming the challenge.

With restrictions on public transport like Metro Rail and city buses continuing, the usually crowded places had a very less footfall in several cities.

Cab-hailing platforms Ola and Uber said they have resumed services in areas within the Orange and Green Zones, and have introduced requirements like wearing masks to ensure the safety of riders and driver-partners.

In a statement, Ola said it has resumed operations in over 100 cities adhering to the government guidelines.

Police personnel lobbed teargas shells and baton-charged agitated workers from Uttar Pradesh, who pelted stones on them near Vareli village on the outskirts of Surat, an official said.

Besides Inspector General (Surat Range) S Pandian Rajkumar, at least 10 policemen were injured in the stone-pelting, police said, A total of 80 people have been detained, police said.

Besides Surat, several labourers also came out on the roads in Rajkot demanding they be sent back to their home towns.

Kerala did not report a single new case for the second consecutive day, but neighbouring Tamil Nadu saw its tally rising by a record number of 527 new cases. Gujarat, Maharashtra and Delhi also reported a significant rise in their numbers.

Among big cities, Mumbai has reported the largest number of cases while several other major urban centres including Delhi, Ahmedabad, Indore and Chennai have also reported large numbers of cases.

From Mumbai’s Dharavi slum, 42 more tested positive during the day to take its total tally to 632. Mumbai’s overall tally reached 9,123 with 510 more people testing positive on Monday, while death toll also rose to 361.

RATING AGENCIES GIVE INDIA THUMBS DOWN

Several experts and independent organisations have said the pandemic and the lockdown will have a huge economic cost. Rating agency ICRA on Monday estimated that the country’s GDP might contract by as much as 20 per cent in the June quarter and is expected to overcome some lost ground in the remainder of the year but still close the fiscal year 2020-21 down by up to 2 per cent.

Another rating agency CRISIL said the pandemic may cull about 10 per cent from the corporate revenue in India, while it may cause a permanent loss of 4 per cent for the country’s GDP.

As the government seeks to balance between curbing Covid-19 and reviving the battered economy, several manufacturing companies, ranging from auto to textiles, breweries to chemical and fertilisers resumed manufacturing operations after getting permission from the respective state governments.

The communication by the Centre came as the apex transporters’ body All India Motor Transport Congress(AIMTC) said that while hardly 30 per cent of trucks are on the roads, reports are pouring in about harassment of drivers, including extortion at border points in some states.

Construction activities resumed in some real estate projects in Gurugram with the existing labour force, but builders in Noida and Greater Noida are waiting for permission from the local administration, according to industry bodies.

After the restrictions were lifted, heavy vehicular movement was witnessed in parts of Bengaluru leading to a traffic jam in some areas.

Traffic jams were also reported in some parts of Delhi.

On the other hand, confusion prevailed in large industrial and business clusters across the country, including in Noida and Gurgaon on the outskirts of Delhi, on reopening of offices and industrial establishments due to lack of clarity on the daily commute of their staff given continuing restrictions on major modes of the public transport.

Defence of Citizenship Amendment Bill and the constitutional question

December 11, 2019 AppicNews Comments Off on Defence of Citizenship Amendment Bill and the constitutional question

NBA’s Adam Silver seeking answers, which are in short supply

March 21, 2020 AppicNews Comments Off on NBA’s Adam Silver seeking answers, which are in short supply