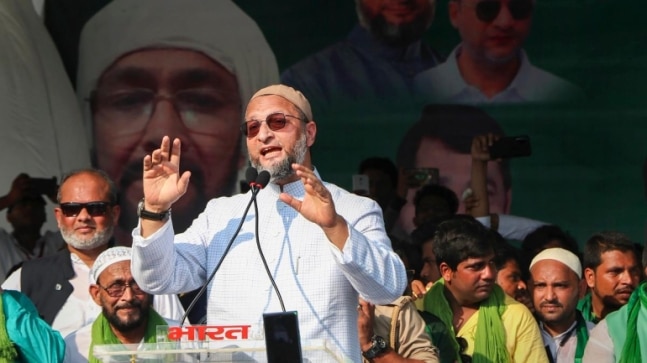 Taking a swipe at the prime minister, AIMIM chief Asaduddin Owaisi said PM Modi never comments on the issues of fuel price hike and the threat posed by Chinese aggression at the Line of Actual Control (LAC).

“PM Modi never speaks on two things — rise in petrol and diesel prices and China sitting in our territory in Ladakh. PM is afraid of speaking on China,” said Owaisi at a public meeting in Hyderabad on Monday.

“When Pakistan attacked Pulwama, PM Modi said ‘ghar me ghuske marenge’ (we will hit the enemy inside their territory). Now China is sitting in our backyard and he is doing nothing,” he charged.

#WATCH | PM Modi never speaks on 2 things — rise in petrol and diesel prices & China sitting in our territory in Ladakh. PM is afraid of speaking on China. Our 9 soldiers died (in J&K) & on Oct 24 India-Pakistan T20 match will happen: AIMIM chief Asaduddin Owaisi, in Hyderabad pic.twitter.com/Q0AabFZ0BU

Owaisi also hit out at the Centre over the recent uptick in terror activity in Jammu and Kashmir, which saw the killings of civilians in separate incidents and the death of nine Army personnel during counter-terrorism operations last week.

“Our nine soldiers died [in J&K] and on October 24, India-Pakistan T20 match will happen,” the AIMIM president jibed, echoing the growing chorus for the cancellation of the match in the wake of the terror strikes in Kashmir.

The situation in Jammu and Kashmir is tense as terrorists continue to target civilians in brutal attacks. As many as 11 killings took place in the last fortnight, with two non-local labourers from Bihar gunned down by militants in Kulgam on Sunday. The United Liberation Front has claimed responsibility for the attack.

A few days ago, Owaisi had questioned PM Modi’s silence on the Lakhimpur Kheri violence and the atrocities committed against minorities in BJP-ruled states.

Kamal Nath on power loss in MP: Was aware of Scindia’s plans, forced to believe otherwise by Digvijaya

May 1, 2020 AppicNews Comments Off on Kamal Nath on power loss in MP: Was aware of Scindia’s plans, forced to believe otherwise by Digvijaya