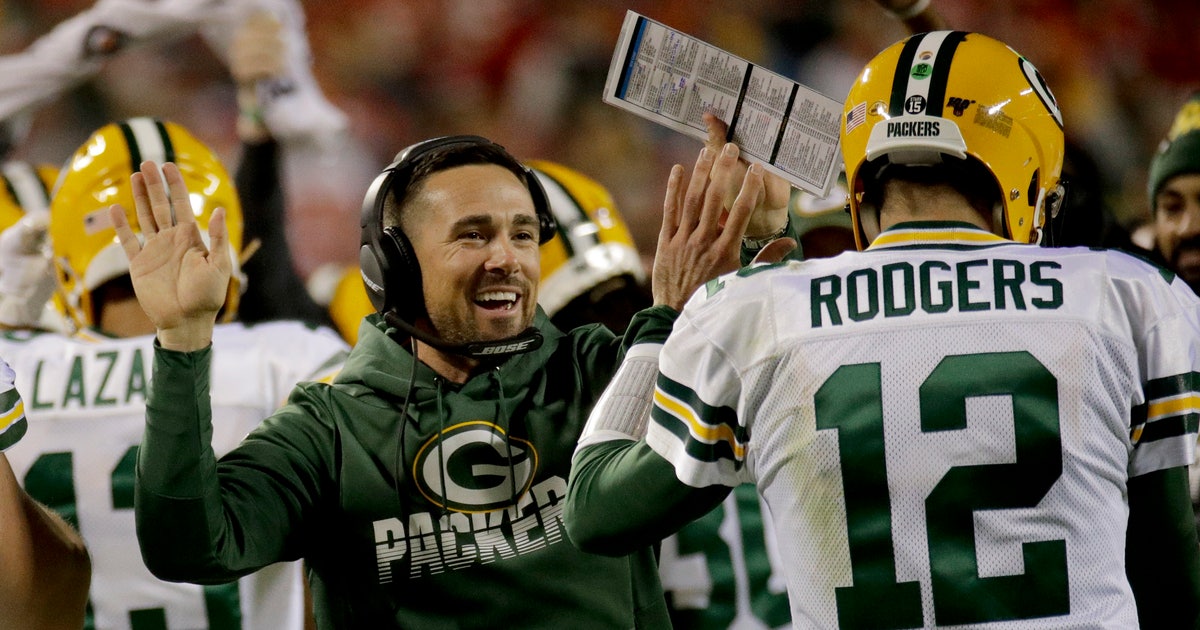 SANTA CLARA, Calif. — When Green Bay coach Matt LaFleur started preparing to face San Francisco’s stellar defense, he sent out a text message trying to get some inside information.

“Hey, would you give me a call? I have a couple of questions about your defense,” LaFleur said he messaged 49ers coordinator Robert Saleh, his former roommate when the two were graduate assistants at Central Michigan.

Saleh predictably didn’t give up any secrets, although there should be few heading into Sunday night’s game between the Packers (8-2) and 49ers (9-1) considering all the ties between the two coaching staffs.

LaFleur considers Saleh one of his best friends, worked under San Francisco coach Kyle Shanahan in Houston, Washington and Cleveland, and has a brother, Mike, on the Niners staff.

“You don’t really think about that much,” he said. “It’s more fun that when you’re going to hang out in the offseason or see each other down in Indy; it’s a little more fun that night when you won the game so you can mess with the other a little bit more.”

LaFleur got his first NFL job as a quality control assistant in Houston when Shanahan was offensive coordinator after a recommendation from Saleh. He then worked as quarterbacks coach under Shanahan in Washington and Atlanta and has taken many of the lessons he learned during those stints into his first year as a head coach.

“There’s so many things that I learned from him,” he said. “But I think just his detailed approach that he takes every day. He’s a guy that has a great vision for what he wants to get done, how to use players, how to adapt and put people in the right position. A lot of my football philosophy has been shaped by him, so it’s hard to sit here and just say one thing that I’ve learned from him because there’s been so much.”

San Francisco quarterback Jimmy Garoppolo showed off both sides of his game last week against Arizona. He threw two interceptions, giving him 10 on the season. But he also threw for a career-high 424 yards and four touchdowns, including the go-ahead score in the final minute. The ups and downs have been part of Garoppolo’s game all season, but he hasn’t let the bad plays affect him. Garoppolo is 32 for 35 for 378 yards, two TDs, no interceptions and a 130.7 passer rating on the drives following his picks.

“That’s just part of being a quarterback,” he said. “In football, bad things are going to happen at some point. No one’s ever going to play a perfect game, so it’s just how you react to those things.”

Packers quarterback Aaron Rodgers has already seen enough of the Bosa family after the Chargers’ Joey Bosa had 1 1/2 sacks against Green Bay earlier this month. Now he has to deal with the younger Bosa brother when he faces San Francisco’s stellar rookie Nick, who has seven sacks already.

“That’s a really good football family right there,” Rodgers said. “They’re both super talented guys. Obviously, Nick is just getting going. But he’s a force off the edge.”

The Niners relied heavily on the running game early this season, averaging 181.1 yards per game through the first seven contests for the second best mark in the league. That aspect of the offense has gone missing the past three weeks as San Francisco has been held to 74 yards per game and ranks third worst in that span, averaging 2.88 yards per carry. That has coincided with an injury to tight end George Kittle, who is one of the better blockers in the NFL.

“We’re going to have to get better,” right tackle Mike McGlinchey said. “We will be better and it’s going to start this week against Green Bay.”

The game against the Packers begins a grueling three-game stretch for the Niners. San Francisco follows this with two more against teams currently in first place with trips to Baltimore (8-2) and New Orleans (8-2). If the Ravens and Saints don’t lose before facing San Francisco, the 49ers will be the first team in the Super Bowl era to play three consecutive games this late in the season against teams with a winning percentage of at least .800, according to ESPN.

Some quarterbacks like to challenge 49ers cornerback Richard Sherman in a show of confidence. Rodgers has taken a wiser approach during his career. In the last six meetings between the two stars, Rodgers has thrown only 14 passes Sherman’s direction, according to SportRadar, completing seven for 85 yards and one interception.

“He has that ability to lull you to sleep sometimes and still jumps on the ball, has fantastic ball skills,” Rodgers said. “He’s a great player. I have nothing but respect for his career and what he’s accomplished.”

STREAKS, STATS AND NOTES — San Francisco won all four meetings in series during coach Jim Harbaugh’s tenure but lost last two since he left. … Last time Green Bay entered game this late in season when both teams had winning percentage of at least .800 came in 2007 when Packers and Dallas both entered with 10-1 records (.909). Green Bay lost 37-27. … Packers have won six of previous eight matchups against NFC teams in week after bye. … Green Bay is 58-39-1 (.597) overall after bye since 2009. … Packers have had zero giveaways for four straight games, ties (2014, 2016) for most consecutive games without turnover by Green Bay since 1933, first year turnovers were tracked. … Packers have not fumbled in four straight games. Last time Green Bay did not have fumble in four straight games in single season was 1967. … It will be fifth time Green Bay appears in prime time this season, with sixth appearance scheduled for Week 16. Packers 3-1 in prime-time contests so far in 2019. … Green Bay’s 3-1 on road this season. … Coach Matt LaFleur needs one win to tie Mike Holmgren, Mike Sherman for most by Packers head coach in first season. … San Francisco begins three-game stretch against teams currently in first place with 8-2 records (Green Bay, Baltimore, New Orleans). … Niners rallied from 16 points down to beat Arizona last week for team’s biggest regular-season comeback since 2011. … Jimmy Garoppolo threw for career-high 424 yards, four TDs last week, joining Hall of Famers Joe Montana, Steve Young as only 49ers QBs to throw for at least 400 yards, four TDs in single game. … Niners ranked second in NFL with 181.1 yards rushing per game through seven games, but tied for 26th over past three games at 74 ypg. … San Francisco had 281 yards after catch last week, according to SportRadar, most in single game since Washington had 312 vs. Dallas on Dec. 28, 2014. … Niners became 10th team since merger to get at least four TD catches from undrafted players in single game last week. TE Ross Dwelley had two, RB Jeff Wilson Jr. and WR Kendrick Bourne one each. … Fantasy tip: Niners rookie WR Deebo Samuel emerged as strong option past two weeks with 16 catches for 246 yards. Samuel became first rookie with back-to-back games with at least eight catches, 100 yards receiving since Odell Beckham Jr. in 2014.

March 9, 2020 AppicNews Comments Off on Game of Thrones in Saudi Arabia: State media releases photos of King Salman after rumours of death, coup

July 3, 2020 AppicNews Comments Off on Doc Redman in 3-way tie for lead at Rocket Mortgage Classic