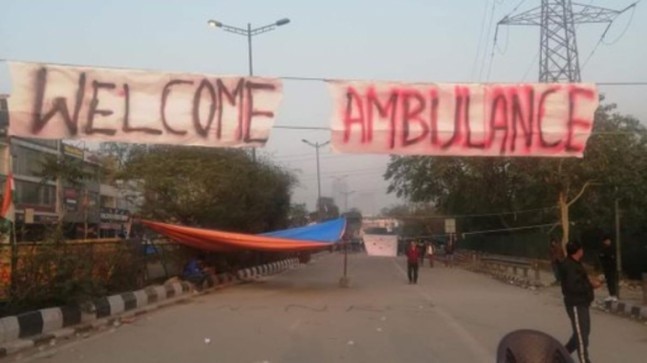 Several people came to the rescue of an ambulance stuck on Kalindi Kunj road due to the ongoing anti-CAA protest at Shaheen Bagh and blockage of the stretch which is the way to several major hospitals in the city.

A CCTV video shared by India Today reporter Tanushree Pandey on Twitter on Saturday showed an ambulance stuck in the middle of the road as a few cops were standing and watching instead of rushing to help the emergency vehicle.

The footage then showed one or two men running to make way for the ambulance. A man put one of the barricades on the side, let the ambulance pass and then placed it back.

Another video from Saturday shared by Twitter users showed protesters clearing the road for an ambulance to pass through the protest site in Shaheen Bagh.

The protesters have also put a banner on the road saying “welcome ambulance” in red bold letters, saying that they will open the road for emergency vehicles.

The 2.5-km stretch of Road 13A connecting Delhi and Noida has been closed since over a month.

When Mail Today visited the site on Saturday, there were no signs of an end to the stalemate. In fact, it appeared that the agitation is getting bigger with preparations on to set up a second tent to accommodate more people. “It gets too crowded on weekends. So we need more space,” said Khursheed Alam.

While tents have been placed on one side of the road, the other side painted with graffiti is closed too blocking access to the nearby Apollo Hospital.

Medical tourism sector employee Syed Suhail is a regular protester. His wife, Kishore Sultana, a teacher, and daughter, Mariyam Sultana, a dentist, have also been part of the agitation. “We are not blocking ambulances. But we will not open the road. We won’t get attention if we do not block it. The inconvenience of a few days is nothing compared to what it means to strip the citizenship of someone who has been living here for decades,” he said.

Food is coming from nearby kitchens and langars set up by Sikh groups at the site. Across the foot-over bridge at the far end facing the main tent, people wait for poori sabzi to be served.

The Delhi High Court has asked police to look into the matter of blockage of Kalindi Kunj road and consider the representation of the petitioner and his plight related to those students who have to travel to schools and also have the board examinations.

The Federation of Sarita Vihar Resident’s welfare association has moved the court claiming that there are many students who are facing difficulties during board examinations as the Kalindi Kunj-Shaheen Bagh stretch has been closed since December 15, due to ongoing protests against the Citizenship (Amendment) Act (CAA).

Delhi Police took to Twitter on Friday and urged Shaheen Bagh protesters to ‘cooperate in public interest’ and help clear the stretch.

“We appeal to agitators at Road No. 13 A Shaheen Bagh to understand the sufferings that the complete highway blockade is causing to residents of Delhi & NCR, Senior Citizens, emergency patients & school going children. The matter has also come up before the Hon’ble High Court,” Delhi Police tweeted.

(With inputs from Tanushree Pandey, Mail Today and ANI)

Priyanka, Rahul Gandhi, on way to meet kin of those killed in CAA violence, stopped outside Meerut

December 24, 2019 AppicNews Comments Off on Priyanka, Rahul Gandhi, on way to meet kin of those killed in CAA violence, stopped outside Meerut