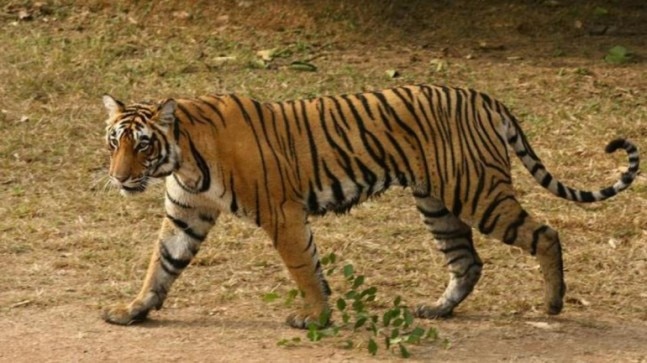 A sub-adult tiger travelled more than 1,300 km spanning six districts in Maharashtra and Telangana before reaching the Dnyanganga sanctuary in Buldhana district of Maharashtra, a forest official said on Sunday.

It took nearly 150 days for the radio-collared tiger, TWLS-T1-C1 to reach the new territory from its birth place, Tipeshwar tiger reserve in Yavatmal district, also in Maharashtra.

The T1-C1 was born in Tipeshwar to resident TWLS-T1 somewhere in late 2016. The tiger has two male siblings C2 and C3, who all got separated during early 2019, press release said.

As a part of a long-term tiger monitoring and dispersal studies, C1 was radio-collared on March 27, 2019 by the team of WII, Dehradun.

“The purpose of the study was to monitor the dispersal pattern of the sub-adults which are normally in the process of exploring new area to set up their territory. C3 was also radio collared. After initial movements inside Tipeshwar, C3 and C1 started exploring adjoining Pandharkawda division and bordering Telangana area.

“In mid-July, 2019, C3 migrated to Telangana and went very close upto Adilabad town, but instead of settling down there, the tiger returned back to Tipeshwar within about 10 days and settled now in Tipeshwar,” said Ravikiran, Field Director, Pench Tiger Reserve.

He said the C1 tiger had entered Adilabad division through Ambadi ghat and Kinwat forests after crossing the Pandharkawda division.

It spent considerable time across inter-state forests of Adilabad andNanded divisions during August and September. C1 subsequently entered Painganga sanctuary for a brief period. Afterwards, in October C1 moved out and went to Pusad division and then Isapur sanctuary. In the last week of October, 2019, C1 entered Hingoli district of Marathwada.

“After reaching close to Chikhali and Khamgaon on December 1, the tiger has finally made its way into another well-managed Dnyanganga sanctuary,” as per the release.

Field Director, Melghat Tiger Reserve, MS Reddy has confirmed that the satellite location obtained is inside the Dnyanganga sanctuary, a well-managed wildlife area with the good prey base.

The tiger is just about 50 km from Melghat landscape, Reddy said.

“It’s worth noting that the tiger, while travelling more than 1,300 km and crossing hundreds of villages, agricultural fields and habitations in six districts in two states, never entered into any conflict with humans except the cattle kills that he made for survival.

The officer said dispersal of T1C1, T1C2 and T1C3 and the 2016 sub-adult tiger all across the landscape indicates that Tipeshwar is a potential source area and tigers need more space in the landscape.

“It also indicates that the tigers may have to cover much longer distances and cross the human dominated, non-forested landscapes in the pursuit of its new territory and mates, much beyond our traditional understanding,” he added.