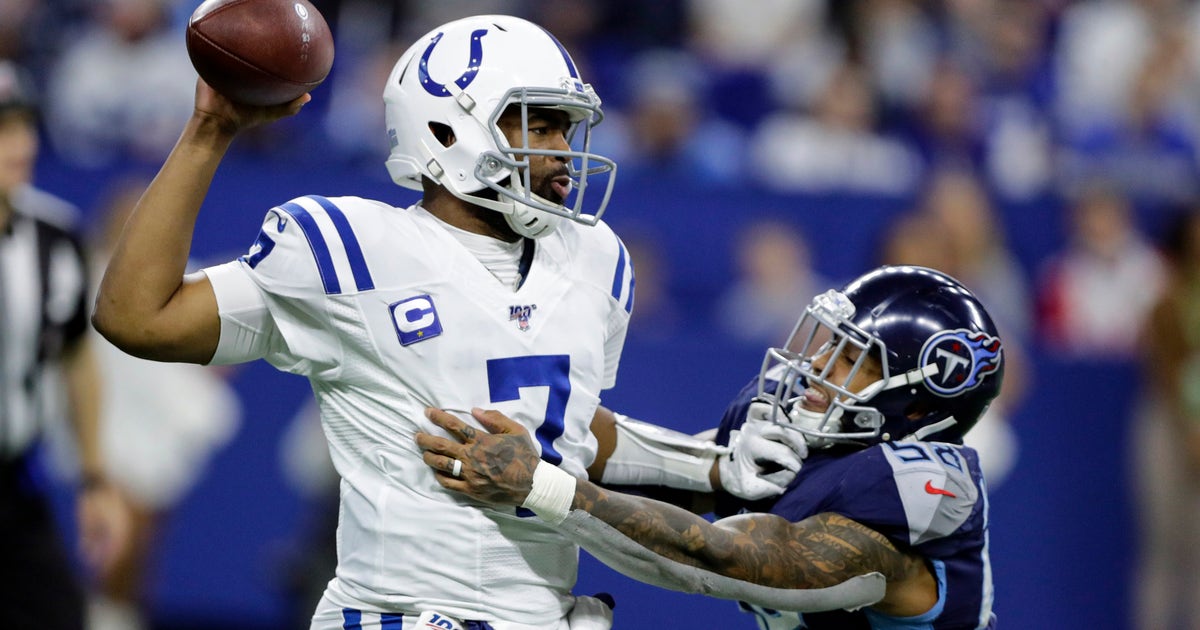 Then the NFL’s career scoring leader heard the sound every kicker fears.

Moments after Tennessee blocked its second field goal Sunday, the 46-year-old Vinatieri looked up and saw Tye Smith sprinting 63 yards for the go-ahead touchdown as the Titans got past the Colts 31-17.

“I can’t ever see what’s going on, I’m looking down at the ball. Whenever you hear ‘pop-pop’ that’s never a good sign,” he said. “I felt like my timing and get-off time was good and all that stuff, so I don’t think that was the issue necessarily, but we’ll watch the film and figure it out.”

Coach Frank Reich didn’t need much time to dissect what went wrong on the decisive kick.

The replay clearly showed Dane Cruikshank splitting a gap on the Colts’ line, racing in virtually untouched and getting almost directly in front of Vinatieri, who never had a chance. Smith then alertly scooped up the ball and nobody, not even the man who once tackled Herschel Walker from behind on a kickoff, could chase down the Titans cornerback.

Smith insisted afterward it was all by design.

“We had it in the plan we could get it and we got to it,” he said. “I was at ball level to catch it and run with it.”

There’s little doubt this has been one of Vinatieri’s roughest seasons, and it didn’t get any better Sunday when he pushed a 55-yard field-goal attempt wide right in the first half only to see a 53-yard attempt flutter down the field after Austin Johnson deflected the ball at the line of scrimmage just a few minutes later. He’s missed 14 kicks this season — eight field goals and six extra points.

Even amid the botched boots, there was plenty of blame to go around from this pivotal division loss and the lingering ramifications that threaten to loom over the final four weeks of the Colts’ regular season.

Jacoby Brissett threw two interceptions, the first leading to a 31-yard field goal from Ryan Succop that tied the score at 17 and the second leading to Ryan Tannehill’s 40-yard TD strike to seal the victory with 3:02 left exactly two minutes after Smith scored.

Indy’s defense, which had given up 45 points in the previous three weeks and hadn’t allowed a 100-yard rusher since 2017, allowed Derrick Henry to run 26 times for 149 yards including a 13-yard TD run on fourth-and-1. Henry became the fifth player in league history to rush for 145 or more yards and one touchdown in three consecutive games. The others: Jim Brown, Eric Dickerson, O.J. Simpson and Adrian Peterson.

But the combination of turnovers, blocked kicks and defensive miscues allowed Tennessee to rally from a 17-7 third-quarter deficit by scoring the final 24 points and delivering a devastating blow to the Colts’ playoff hopes.

Tennessee (7-5) leads the Colts (6-6) by one game in the AFC South, has evened the season series and matched Indy’s loss total against division foes.

And with four losses in five games and three of their last four on the road, Indy knows what it must do to salvage a season that once looked so promising.

“Let’s do everything we can to finish 10-6, and 10-6 gets you in (to the playoffs) a high percentage of the time,” Reich said. “We play for each other, we believe in each other and that’s what we’ll continue to do.”

And nothing sounds sweeter to Vinatieri than a strong close to the season.

“There are four games left,” he said. “We’re going to see if we can get back and right the ship.”

Top-ranked Michigan State opens with 69-62 loss to No. 2 Kentucky

November 6, 2019 AppicNews Comments Off on Top-ranked Michigan State opens with 69-62 loss to No. 2 Kentucky