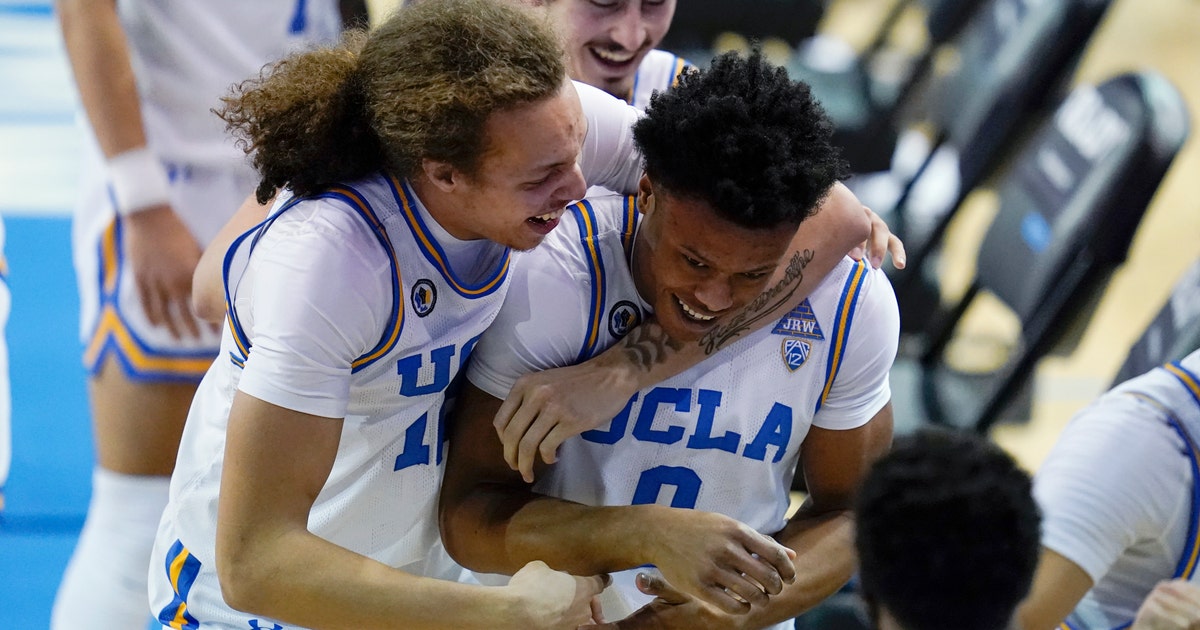 LOS ANGELES (AP) — Mick Cronin’s teams have won many different ways in his 18 years as a college basketball coach, but his UCLA squad added a new one to the list on Saturday night in what ended up being a milestone victory.

The Bruins didn’t grab their first lead over Arizona State until Jaylen Clark made his second free throw with 1.4 seconds remaining. The freshman’s foul shot allowed UCLA to escape Pauley Pavilion with a 80-79 victory to give coach Mick Cronin his 400th career win.

Cronin said it was the first time he can remember winning a game after trailing for virtually all of it.

While Cronin appreciates the milestone, the more important fact is that the Bruins win ties them with Southern California atop the Pac-12 Conference. Both have a 12-3 mark going into the final two weeks of league play.

The Sun Devils led 77-70 with 3:57 remaining after Kimani Lawrence’s 3-point play but the Bruins rallied to with a 9-2 run, including a pair of Tyger Campbell free throws with 39.3 seconds to tie it at 79-all.

Holland Woods missed a 3-pointer with 15 seconds remaining, which was rebounded by UCLA’s Jaime Jaquez Jr. Campbell missed a potential game-winning jumper but Clark got the rebound and was fouled by Lawrence.

Clark was 7 of 8 on free throws coming into the game, but missed the first one. He nailed the second, which was enough. UCLA was 19 of 23 from the line for the game, including 13 of 15 in the second half.

“I think this is the best free throw team I’ve had in 18 years. The key was getting fouled,” Cronin said. “We were getting stops and having possessions that we did not waste.”

Arizona State called a time out, but Alonzo Verge Jr.’s desperation half-court shot was off target as the horn sounded.

“I thought we played really well through the majority of the game. We just didn’t make one more play that was necessary in order to win, whether that was defensive rebounds or someone hitting a shot,” ASU coach Bobby Hurley Jr. said. “As the game wound down, we just made too many mistakes in the last two minutes of the game.”

“It was an ugly start and an ugly game but I’m glad we came out with the win,” Riley said.

Martin scored the game’s first eight points as the Sun Devils raced out to a 10-0 lead. They kept the lead in double digits for the first six minutes until UCLA starting slowly whittling down the lead. Bernard’s 3-pointer brought the Bruins within 33-32 with 1:44 remaining before Woods and Martin connected from beyond the arc to push lead back up to seven.

Arizona State was up 41-34 at halftime. It extended its lead to 58-48 on Lawrence’s dunk before the Bruins started slowly coming back.

“I’ve had a lot of different types of teams. I thought my first year (at Murray State) I was going to be the next Coach Wooden,” Cronin said. “We averaged 82 points per game, were second in the nation in assists and field-goal percentage and then everyone graduated and I realized I was far from Coach Wooden. Now I am just trying to make him and his family here proud.”

Arizona State: It is the second straight year the Sun Devils have lost a heartbreaker in Westwood. They are 72-13, including 5-3 this season when leading at halftime.

UCLA: The Bruins have won 19 of their past 23 Pac-12 games dating to last season.

Arizona State hosts Washington on Tuesday to make up a game that was originally scheduled for Jan. 2.

UCLA travels to Utah on Thursday. The Bruins won the first meeting 72-70 on Dec. 31.

WHO chief thanks India, PM Modi for ‘continued support’ to global Covid response

January 23, 2021 AppicNews Comments Off on WHO chief thanks India, PM Modi for ‘continued support’ to global Covid response

Governor refused to give us more time, talks with Cong, NCP on: Aaditya Thackeray on Maharashtra govt formation

November 11, 2019 AppicNews Comments Off on Governor refused to give us more time, talks with Cong, NCP on: Aaditya Thackeray on Maharashtra govt formation

February 16, 2020 AppicNews Comments Off on India likely to host England in Day-night Test at refurbished Motera Stadium in Ahmedabad