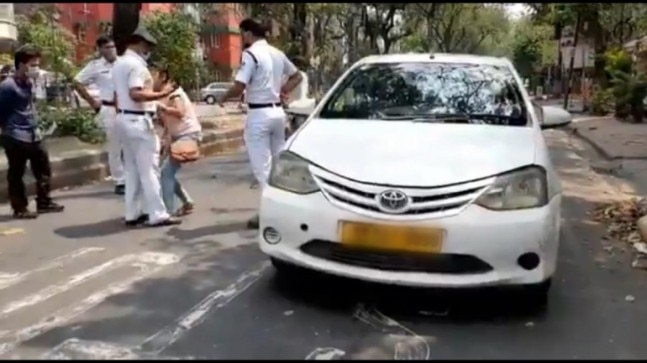 The national lockdown over the coronavirus has sent some people in the country on the edge as they scramble to procure essential services. A woman in Kolkata even went to the extent if biting a police officer!

A video has gone viral on social media showing a woman going into a tussle with police officers as they tried to question her over travelling as the entire country is under lockdown.

Enraged over the questioning, the woman screamed at the police officer, accused him of shoving her and even bit him.

The incident happened around 12.30 pm when the car, an app-based cab, was stopped by police at PNB More.

The vehicle was coming from the CA Block side when it was stopped by our duty officers. When they questioned those inside the car on where they were heading, the accused woman got down and rushed towards a policeman and tried to bite him.

The woman and her friend came to Salt Lake from Ballygunge and claimed they were going to get medicines but failed to show any prescription, a police officer said.

“We never spoke to the woman but she came out of the vehicle and attacked one of our officers, he said.

According to a police officer, the woman even drew blood from an old wound she had and smeared it across the police officer’s shirt, threatening to frame him for injuring her.

In the video, blood can be seen on the police officer’s uniform and the woman can be heard screaming that there is no one to take of her care as she lives alone.

Later, the woman was arrested both for violating the restrictions as well as assaulting a public servant on duty, a senior officer of the Bidhannagar City Police said.

A man accompanying her in the vehicle and the driver were also arrested for violating the total safety restrictions, he added.

(with inputs from PTI)

March 8, 2020 AppicNews Comments Off on International Women’s Day is a time to celebrate all females in sports